Jennifer Cunha collaborates on research projects related to animal cognition. Her main focus is to study the cognitive and communication skills of parrots, and the potential for literacy development.

Abstract: Reading is a complex cognitive process of decoding symbols to derive meaning. Although it has been assumed to be a uniquely-human skill, there is evidence that other species, such as pigeons and baboons, can master some orthographic processing skills—discriminating written words from written nonword letter combinations. An Umbrella cockatoo has also demonstrated the ability to learn phonics. Here we ask whether a cockatoo can silently read a written word, correlate it with a picture, and access it as a vocabulary word when verbally prompted, utilizing processes known as Sidman’s Stimulus Equivalence and phonological recoding—learning vocabulary through reading.

In this blind reading comprehension test, cards were created with a picture on the top left and a word on the bottom right that could be covered with a flap. The cockatoo was first prompted to 1) silently read the novel-impression word on the bottom right (i.e., hamster) when the flap was up and it was uncovered; 2) touch the corresponding picture (i.e., hamster) on the top left to correlate the picture with the matching word label; 3) repeat this process with a second word/picture combination (i.e., otter); and 4) once the words were hidden with the flap, select the accurate card out of two options (i.e., hamster and otter) based on verbal prompt (“Which one is the hamster?”)

The cockatoo’s accuracy (M=90%) was higher than chance. These results indicate that cockatoos may have the ability to engage in reading comprehension tasks, one of the processes required for literacy.
(In peer-review)

Abstract: Symbolic representation is the complex cognitive process of learning to use a symbol, such as an image, word, or sign, to stand for something else. A variety of non-human animals, including several primate and avian species, can engage in symbolic representation. One particularly complex form of symbol representation is the ability to learn associations between orthographic symbols and speech sounds, in which the symbols combine and recombine to change what is being symbolized. To date, there is no evidence that non-human animals can learn this form of symbolic representation, also called grapheme-phoneme correspondence. Here, we ask whether an Umbrella cockatoo (Cacatua alba) can learn grapheme-phoneme correspondence to recognize previously unseen, unheard words. The cockatoo was trained with systematic phonics instruction and then tested under blind conditions in a two-alternative-forced-choice task to correctly select the index card with a written word consistent with an English spoken word. The cockatoo’s accuracy (M= 71%) was significantly higher than chance, and higher than a control group of English-speaking human adults who watched muted videos of her test trials to guess the correct card. Accuracy was negatively associated with the number of overlapping letters shared between the two written words—the more common letters there were to appear in both words, the less accurate the cockatoo was. This exploratory analysis suggests that the cockatoo’s errors were not random, but related to properties of grapheme-phoneme correspondence. Together, these results indicate that cockatoos may have the ability to learn grapheme-phoneme correspondences. 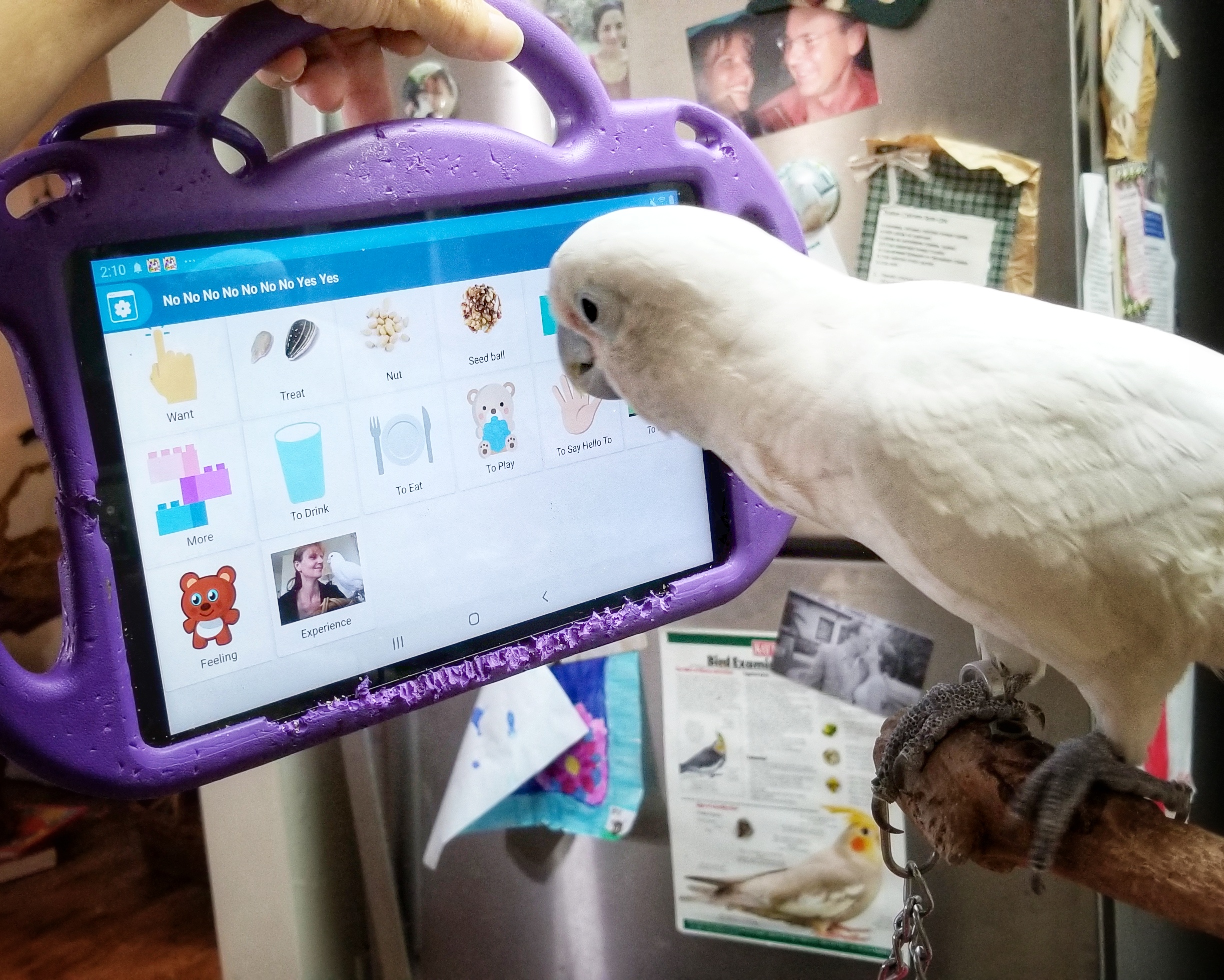 Use of a Tablet-Based Communication Board in a Goffin's Cockatoo (Cacatua goffiana).

Jennifer Cunha and Carlie Rhoads. 2020. Use of a Tablet-Based Communication Board and Subsequent Choice and Behavioral Correspondences in a Goffin’s Cockatoo (Cacatua goffiana). In Proceedings of Animal and Computer Interaction conference. (ACI’2020). ACI, Milton Keynes, United Kingdom, 9 pages. https://doi.org/10.1145/3446002.3446063

An enculturated Goffin’s cockatoo (Cacatua goffiana) was taught to use a publicly-available android-based communication board (CommBoard). Through associative conditioning, the subject learned to press pictures representing items in categories for foods, beverages, activities, objects, and interactions. The cockatoo was also taught to ring a bell to request the communication board, and the board was additionally given in response to vocalization or, if proximally close, a physical touch to the researcher’s ear. Over the course of 18 days, interactions were tracked. Each of cockatoo’s responses to the question “What do you want?” was then corroborated by follow-up questions and body language verification (voluntary/involuntary transfer, acceptance or rejection of request execution). In all of the sessions (n = 25), the researcher responded to the request with a corroboration task, and 84% of the interactions involved two corroboration tasks. The interactions comprised 62 request and follow-up question tasks, and the cockatoo’s response-positive corroboration consistency rate was 94%. Additionally, the cockatoo used the communication board for the following requests: 44% - interactive activity; 36% - food/beverage; 19% - extra-familial interaction; 8% - object. These results suggest that cockatoos may be able to use a communication board to make intentional requests.

1-10 Quantity and Numeral Counting and Addition Skills in Parrots.

Fourteen parrots, including species parrotlet, budgie, Rosa Bourke parakeet, cockatoos, Amazon parrots, and African grey parrots participated in four phases of math quantity and symbol discrimination tests under blind conditions over the course of seven months. Finally, the parrots were instructed on addition skills, and participated in addition tests on quantities and numeral symbols from 1-10. Manuscript in preparation.
In Progress

Parrots’ Use of Choice Symbols to Indicate Presence or Non-Presence of a Match.

Cunha, J., Rhoads, C., & Niemann, H. (manuscript in preparation). Parrots’ Use of Choice Symbols to Indicate Presence or Non-Presence of a Match.

Abstract: In this study, we explore whether parrots can be trained to use symbols to communicate “yes” and “no” on an abstract but objective measure, the match-to-sample (MTS) paradigm. The study includes a Pilot Group and a Study Group of birds totaling six parrots including four African greys, a cockatoo, and a pionus (three species). All six parrots were trained to use a symbol correlated with a verbal prompt and the concept of “yes,” and another symbol correlated with verbal prompt and the concept of “no,” and then they were tested on their use of “yes” and “no” symbols to communicate whether or not two presented cards were a match under blind conditions. The Pilot Group used MTS color cards they were trained to use as a game prior to the study, but were tested under blind conditions. The Study Group were trained and tested with MTS color cards to examine their ability to generalize the use of the choice symbols using colors to which they had not been previously exposed. The Pilot Group yielded an accuracy rate of 73.3% (n = 3). The Study Group yielded an accuracy rate of 76.3% (n = 3). In private and institutional settings, avian caregivers may be able to utilize this knowledge base to receive feedback about parrots’ husbandry and enrichment preferences.

Research demonstrates that parrots are capable of high-level cognitive processing, including inference-by-exclusion, counting, music preference, symbol use, and abstract concept processing. Yet captive parrots also have high levels of stereotypy. Researchers have suggested that enhanced enrichment can include non-traditional learning opportunities with varied learning, motor, attentional and sensory components by way of cognitive challenges that increase in difficulty upon mastery of tasks—as may be demanded in wild settings.

While husbandry training remains an essential practice for avian care and welfare, here we explore the use of a variety of cognitive learning enrichment through “kindergarten concept” training as a way to challenge and engage captive parrots through those motor, attentional, sensory, and memory components. Non-traditional enhanced enrichment opportunities may be a resource in addressing the ongoing cognitive enrichment needs of captive parrots and decrease behavior challenges and stereotypies.

Advancing Communication with Parrots: Can They Learn to Read?

Abstract: Reading is a complex cognitive process of decoding symbols to derive meaning. It has been assumed that reading is a uniquely-human skill, although baboons and pigeons have been observed to successfully master orthographic processes. In this work, two cockatoos were trained with modified systematic phonics instruction on grapheme-phoneme correspondence, phonological awareness, and semantic processing (vocabulary). The researchers conducted a variety of grapheme-phoneme processing task experiments under double blind and informal conditions to test the cockatoos’ mastery of basic reading skills: grapheme-phoneme correspondence (pseudoword and real word reading) and semantic processing of written words—the ability to understand the meaning of a written word and add it to the cockatoos’ lexical vocabulary. The subjects’ overall accuracy was 74%. These results indicate that cockatoos may have the ability to engage in the complex cognitive processes required by reading.

Abstract: Choice and enrichment are integral components in captive avian husbandry practices. Research demonstrates that enhancing the degree of control an animal has over its environment can lead to beneficial effects on behavior. Some have argued that control is a vital part of psychological wellbeing and even that an animal’s own choice should be a determinant for what enrichment is provided. In response to behavioral challenges (vocalizations, aggression) observed in a Goffin’s cockatoo (Cacatua goffini) in my care, I sought to enable my parrots to more clearly and fluently express choice about husbandry and environment, such as food, beverage, enrichment, activity, and handler preferences by use of yes/no objects and simple vocabulary development. I also utilized phonics training as an enhanced enrichment activity. Extending the orthographic processing research already conducted on seals, pigeons, and primates, the parrots successfully memorized single grapheme-phoneme correspondences (letter/sound symbols). The parrots went on to demonstrate mastery of multi-sound/text correspondence tasks, blending sounds in novel words to be able to decode those words, even under blind conditions in university research. The parrots utilized this knowledge base to communicate about their husbandry and enrichment preferences.